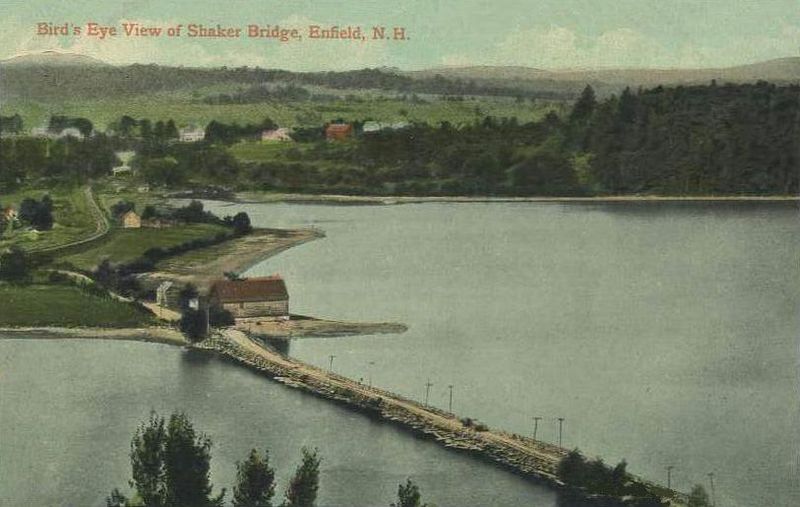 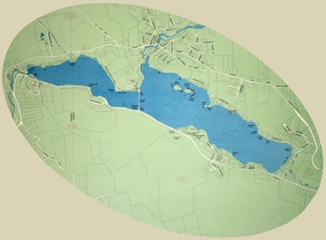 Mascoma Lake is a four mile lake located in the towns of Enfield and Lebanon in the heart of the Upper Valley. The Mascoma River feeds into and out of the lake.

The derivation of the name “Mascoma” is of Indian origin “Na- mas-com”, formerly supposed to mean “bearlike” or “bearwater” but later found more probably to mean fish, lake or river. Formerly  spelled Masquom, Masome, and Mascomy (from Charles A. Downs). Relham was the first name used for Enfield. Bradford cove was named for a Shaker elder, John Bradford, and Mont Clare in honor of Clara G. Churchill of Lebanon.

Shakers constructed a large stone building in 1837. LaSalette Seminary was established in 1927. Sacred Heart Camp, now privately owned cottages, was established in 1937. The original famous Shaker Bridge, said to be the only one of its kind in the world, was built by the Shakers in 1848-49. It was destroyed by a hurricane in 1938 and rebuilt, with the dedication August 17, 1940. The dam was rebuilt in 1982. The first cottage on the lake was built by Frank C. Churchill in 1883 on Point Comfort. The first cottage at the head of the lake was built by Mr. Smith of West Lebanon on Crescent Beach.

A copy of this 1995 map, as well as the 1971 map, are available at no charge from mla@mascomalakeassociation.org.

In addition, we offer an updated 2019 version of the Mascoma Lake map for sale. A similar map had previously been printed in 1971 and 1984. The map which is 18” X 36” lists the property owners who abut the lake. A limited supply of this new map has been printed and they are on sale for $25 which helps the MLA to cover design and printing costs. If you are interested in purchasing, please email us at mla@mascomalakeassociation.org.